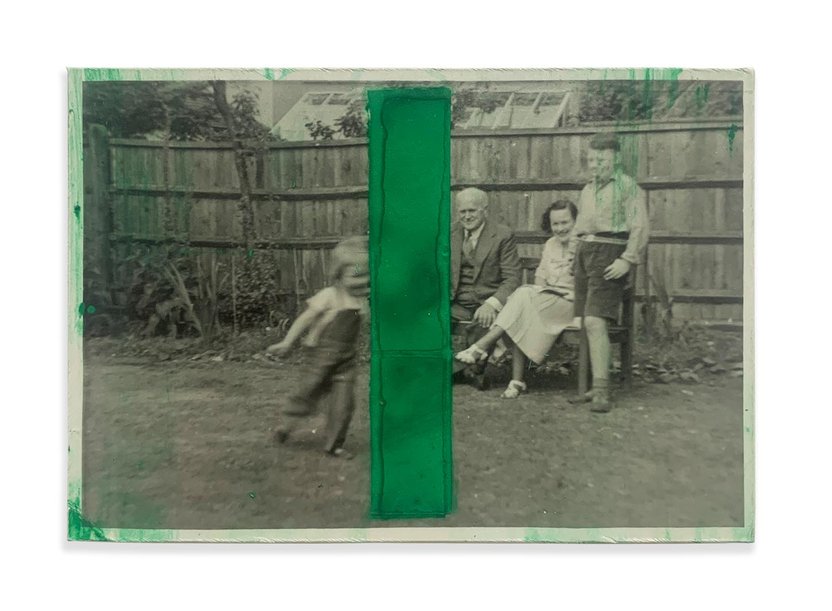 A Cosmos grown to self awareness. XI

I began this series of small works in 2020, but uncertainty regarding their content, in particular it’s conceptual relationship to the rest of my practice, meant it was early 2022 before I felt confident in presenting them. They have some previous, insofar as there is a resemblance to a series I made in 2013, each of which comprised an image cut from a newspaper and overpainted almost entirely with an irregular four sided shape, such that only the smallest clues of the scene beneath remained detectable. The difference between the 2013 series and this one is that the overlaid shape, a uniform, thin, upright rectangle, is in fact a capital letter sans serif “I”, generally leaving the photgraphs easy to read.

The photographic substrates I inherited from my father, who was an antiquarian book dealer. Not wishing to discard them, but having found them of no obvious use, they fell into employment here. Which is to explain that the individuals, events and places depicted are not specifically important. They are anonymous and not associated with me in any way other than to have been a presumably insignificant part of my father’s stock in trade. So, when picking images for this project, I had an existing pool there was no need to look outside of and the only important selection criteria was that they included people.

Throughout the series I have attempted to position the “I” that it might be perceived as part of the environment. In some cases the painted monolith obscures a figure that others are interacting with, stealing their focus, and in others it is inserted as an apparent obstacle to the people in the frame. Concerned that these works may read as rather sober, I felt this somewhat playful approach was necessary. The initial idea was simply to place the painted element centrally in all cases, ignoring the content of the photograph, but I found the detachment of the pictorial players made for a dull result. Bringing the form into the scene injected a bit of life, making the people apparently conscious of but also comfortable with the intrusion, and ultimately adding significantly to the conceptual aspects too.

And that’s what these works are really about - life, consciousness and its intrusive influence on my thinking. The ideas behind the work, and indeed the title, are drawn from the following statement by astrophysicist Carl Sagan:

“We are the local embodiment of a Cosmos grown to self-awareness. We have begun to contemplate our origins: starstuff pondering the stars; organized assemblages of ten billion billion billion atoms considering the evolution of atoms; tracing the long journey by which, here at least, consciousness arose.”

I was already vaguely aware of this idea through conversations with my wife, but the stark simplicity with which Sagan puts it provided an epiphanic moment for me. I read Cosmos, the book in which the quote first appears, in 2017 and certain ideas it presents have had a profound effect on how I approach my life and my practice.

These works are the first I have presented that address such ideas directly. Based on Sagan’s words it occurs to me that, if we are indeed matter become spontaneously self aware (an idea to which I certainly subscribe, I might add), then a statement of self - the word I - is possibly the most profound ever made (in English - obviously the equivalent in any other language is equally important). An individual statement “I” is the universe asserting its own existence to itself. It is the moment unconscious matter, gathered together in just the right way, sparks into and confirms awareness.

Bringing ideas like this into my work is a daunting notion, but given their importance and consistent, welcome trespass upon my day to day thinking, also an inevitability. I have no hope of making something that may materially match the scope of the thought, but this is not necessary. I have come to appreciate a physical modesty, familiar and accessible, as a valuable tool of communication, particularly in this case. Conceiving of and discussing our significance as the custodians of natural material consciousness within a material universe is big enough. A grandiose physical gesture does little to aid the conversation.

So, these small, simple things I have made from old photographs and paint are but one attempt to make some sense of complex and overwhelming notions for myself. All of the people in the photographs will have continually uttered the immortal I throughout their lives, and each time it is as significant and profound as ever it has been. The statement is an immovable monument to the wondrous natural development of the inanimate into the sentient. I have introduced it into the photographs as an ever present, dominant fundament of the lives depicted therein, perceptible as part of the photographic narrative, but simultaneously detached, abstract, hovering outside, and never really there as a direct influence on a person’s day to day life.