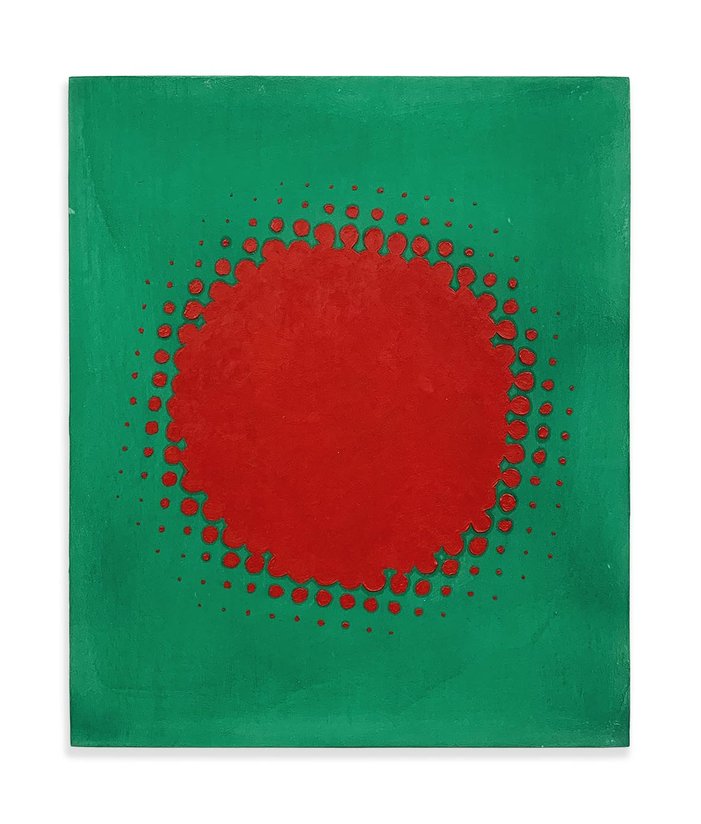 The ideas upon which this series are based began to form when I was sifting through stacks of my daughter’s drawings, performing the regular and necessary weeding to determine which were worthy of her childhood archive and which were destined for the round file. Among her prolific output were many simple scenes of stick figures, usually our family of three, in a landscape. Almost invariably a crude circle with five or more dashes of vaguely uniform length radiating from around the circumference appeared in the top right or left corner of the page - of course, the sun in the sky. Aside from feeling pleased that she appeared to associate the times we spend together with a bright outlook, it occurred to me that drawing the sun, one of the first things children learn in the development of figurative representation, may be a more profound and conceptually complex thing than it is commonly given credit for.

I hold the sciences in the highest esteem. In my opinion the exploration of the material world and its interrogation through verifiable, measurable means are among the most important things our species does. If we are to ascribe meaning to our own existence, surely the expansion of our understanding of the material universe must vie for top billing. I have no great aptitude for study of this nature myself, but the subject fills me with wonder and excitement. I place my trust in science and, as a general principle, those who pursue it as the path to truth.

Occupying the layman’s, position certain principles regarding the formation of the universe and the complex natural progression that has lead to human consciousness are recurrent in my everyday thoughts. I cannot explain them in scientific terms and would dare not try, but my understanding is that chemical elements heavier than hydrogen and helium form only within the intense pressure and heat of stars. That being the case, at the atomic level all things are predominantly built of matter born this way. This idea that we are therefore “starstuff pondering the stars” as Carl Sagan so poetically put it, determines my perception of the act of making an image of the sun, or indeed of any star.

What are we really doing when we make such an image? Are we in fact making a universal self portrait? I would argue that yes, on a grand and romantic scale, we are. We, the highest form of universal consciousness to have developed since the universe began 13.7 billion years ago (as far as we are aware) are no different in terms of basic material construction to anything else that has existed. The raw materials that comprise our bodies were formed within stars, therefore when we make representation of the same, permitted by a naturally developed self awareness, we are the universe recognising, acknowledging and responding to itself.

It is impossible to make a faithful drawing of the sun from direct observation, I.e. without any sort of filter or assistant apparatus, and though it may technically be possible to do so with mechanical assistance, how many of us actually will? Arguably everyone will make their own naive sketch at some point, perhaps abstracted from an occasional squinted glance, but predominantly  inherited from images made by others, and probably in response to how it feels to have the sun shine upon us - though we may not be able to see its rays, we can certainly feel them. Like my daughter, most will make many such images in childhood, but progressively fewer as the years pass. The average experience of making an image of the sun will be one of relative naivety, and I think this is an important and endearing characteristic of our nature.

The sun is the most important star, to us, certainly. In the universe now? Ever to have existed? This we cannot possibly confirm, although considering the life it has allowed to develop, neither can it be denied. As far as Professor Brian Cox is concerned, for this reason it is the “God Star”, and if anything at all is worthy of worship, surely the sun’s case is as strong as any pretender. We are in thrall to it and so it seems only right that our representations are as unsophisticated as we are meek in the face of its oblivious benevolent dominion.

In my daughter’s drawings the sun invariably plays a supporting role to the main cast of our family, which is just as it should be for a child, but in these paintings of mine it takes centre stage. They vary in style and media, and though I consider them all naive, some are more inspired by the childish than others (one is in fact lifted directly from my daughter’s sketches). I seek to embrace simplicity here. It seems right to do so, but also pointless to attempt sophistication in the shadow of grand concept.

I have long pursued something essential in painting, predominantly through abstraction and related directly to the medium or the object itself, and perhaps it is little different in this case. There is certainly a fundamental essence in the notion here, and that is liberating when I consider the paintings. As representations of the sun their meaning to me transcends a search for universal truth in the self constrictive field of navel-gazing meta-painting (which I inevitably and routinely return to). They are liberating in that regard and the subject is comfortably welcoming in its familiarity without the risk of feeling insignificant or irrelevant. I suppose the irony might be that though they move away from painting about painting, by making pictures of the sun I am only really shifting scales in the field of self reference, looking up instead of down.